Pete Maravich No. 44 Jersey to be Retired by the Hawks!

Wednesday, January 11th, 2017 and is filed under Uncategorized 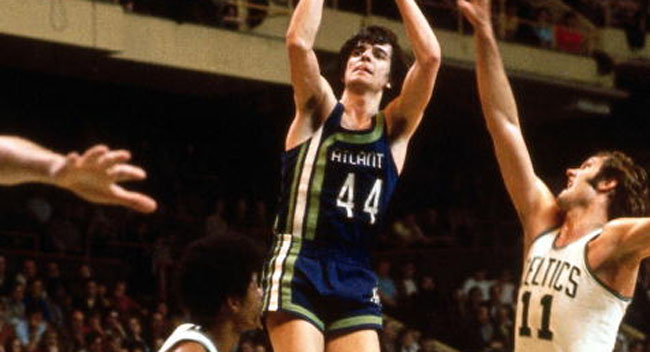 According to Chris Vivalamore of the Atlanta Journal-Constitution, the Atlanta Hawks are planning to retire the number 44 jersey of Basketball Hall of Fame legend “Pistol” Pete Maravich later this season. No date has yet been set for the ceremony.

Maravich was the third pick in the first round of the 1970 NBA Draft after playing only three years at LSU. Maravich averaged 24.3 points per game along with 5.6 assists and 4.2 rebounds per game in the NBA. The “Pistol” played 302 games with the Atlanta Hawks in four seasons.

‘Pistol’ Pete Maravich revolutionized the game of basketball by introducing “showtime” basketball into the game. His flamboyant style, no-look passes, and circus shots make ‘The Pistol’ one of the most popular players in basketball history. From his college days at LSU through his 10 years in the NBA, Maravich drew some of the largest crowds of the period.

Injuries forced Maravich into retirement in 1980.

Maravich passed away January 5, 1988 during a pickup game at a church gym in Pasadena.