Monday, June 17th, 2019 and is filed under YouTube Videos 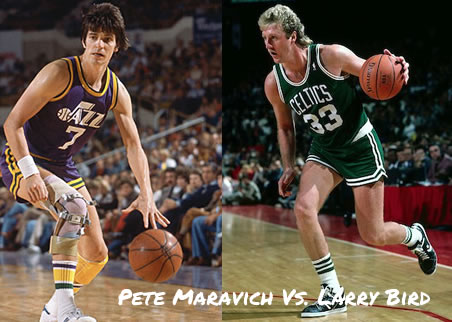 Pete Maravich VS Larry Bird – who was the best? Now that’s a tough question and a matter of opinion, so let’s start with a little background information.

Pistol Pete Maravich was known for his “Showtime” style of basketball long before it became mainstream. Some thought Pete was a showoff or a hotdog, while others thought of him as one of the greatest basketball players of all time.

Pistol Pete is still the all-time leading NCAA Division I scorer, amassing 3,667 points in only three years on the varsity team at LSU. Keep in mind that this was done in the late 1960’s, which was before the establishment of the 3-point shot. During his college years, Pete Maravich averaged 44.2 points per game and holds records across many categories in the NCAA.

Larry Bird was drafted by the Boston Celtics in the 1978 draft, but decided to play out his remaining college season at Indiana State and led them to the NCAA title game that year. Bird was the highest paid rookie in NBA history up to that point, landing a five-year $3.25 million dollar contract with the Celtics. Larry Bird went on to be a 12-time NBA All-Star and was awarded the NBA’s Most Valuable Player Award three years in a row in the mid-1980’s.

Let’s take a look at some highlight footage from both Pistol Pete Maravich and Larry Bird and you can decide for yourself who you think was the better player.

The following video was posted on the official NBA page on YouTube and is titled, “Pistol Pete Maravich Ultimate Highlight Reel.”

Now for some Larry Bird highlights. This video was also posted on the official NBA page on YouTube and is titled, “Larry Bird ULTIMATE Mixtape!”

You’re going to love this one – Pistol Pete Maravich Top 20 Plays by CroPETROforeverNBA posted in February 2016. This video has racked up almost 3 million views on YouTube as of January 21, 2021. While you may not agree that these are The Pistol’s top 20 plays, you’ll have to admit, Pete Maravich was a master at handling a basketball!

We’ll finish up with Larry Bird. The following was posted by “4 the Win” on YouTube in September of 2015. It’s a nice compilation of plays, shots, dunks, blocks, and just plain old-fashioned hustle plays.

Okay, so what did you think? Who did it better in Pete Maravich VS Larry Bird? Tough call.

If you’d like to learn the same drills that turned Pistol Pete Maravich into a Basketball Hall-Of-Fame legend, check out Pistol Pete’s Homework Basketball training series listed below.