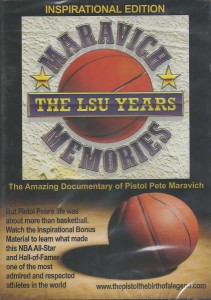 Maravich Memories The LSU Years synopsis: Pistol Pete Maravich lit up the skies over Louisiana. In his meteoric three-year career at LSU and emerged as college basketball’s all-time leading scorer with 3,667 points and an incredible 44.2 points per game average. Pistol Pete Maravich was a three-time All American and was named College Basketball’s Player of the Year because of his outstanding skills as a basketball shooter.

Pistol Pete Maravich… the name still rings in the ears of basketball fans across America. Who can forget the floppy socks, behind-the-back passes, between-the-legs dribbling, and the wondrous assortment of shots.

Now experience the record-breaking career of college basketball’s most prolific scorer and greatest star. Maravich Memories – The LSU Years is the story of Pistol Pete Maravich through never-before-seen highlight footage, interviews and original music on this collector’s edition video.

But Pistol Pete’s life was about more than basketball. Watch the Inspirational Bonus Material to learn what made this NBA All-Star and Hall-of-Famer one of the most admired and respected athletes in the world.