Tuesday, May 7th, 2019 and is filed under YouTube Videos 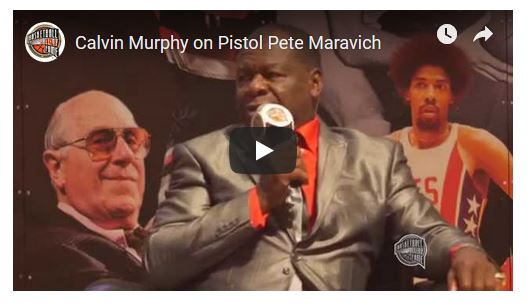 Interviewer: Looking at some of these little guys here, they probably never saw Pistol Pete play. I hope they look on YouTube. Tell them who Pistol Pete was.

Calvin: You know, in college, Pistol and I fought for the scoring leader in the country, and all three years I was second to Pistol. And I used to make excuses. “The only reason Pistol scored more than me is because his dad coached him,” and so on and so forth, until I got to play against him, and that was a lot of bologna. He was… He was… He was… Goodness gracious, it’s hard to describe somebody that was about 6’6″, 6’7″, handled a ball as well or better than myself. He just didn’t shoot the basketball, he was a pure shooter.

Calvin: He would pass the ball through the eye of a needle. I got a chance to play with him for the first time in the High School All-American Game in Memphis, and it’s tough. You’re trying to play your game, and you’re watching him.

Calvin: You know, you’re in the back court with him.

Calvin: We were starting guards for the All-American Team, and I got to be great friends with him from that point on. Well, you know, if you can’t beat ’em, you’ve got to join ’em.