Wednesday, January 20th, 2016 and is filed under Uncategorized

Pete Maravich Biography – Pete “Press” Maravich instilled in his son, “Pistol” Pete Maravich, a love for the game of basketball that carried throughout his life. Press, a naval aviator and former professional basketball player turned coach, began showing Pete the fundamentals of the game when Pete was seven years old.

Together, father and son devised creative and fun ways to help Pete master the fundamental skills needed to excel in basketball. Named everything from around the world and the space clap to the scrambled egg, wrist pass, and the flap jack, these drills improved Pete’s quickness and hand-eye coordination while strengthening his self-confidence. Pete was obsessive about improving his skills, spending hours upon hours practicing shooting, ball handling, dribbling, and passing in an old gym. Press went to great lengths to keep the drills interesting for his son – even going so far as to drive his car at varying speeds while Pete leaned out the passenger window, trying to control the ball he was dribbling! 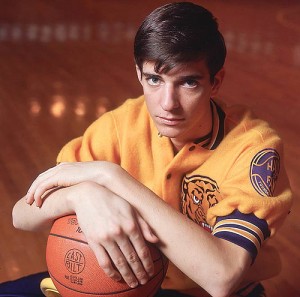 Pete’s high-school basketball career did not begin well. Being a short 5″2″ tall, ninety pound eighth-grader shooting warm-ups with varsity boys who were five years older and ten to fourteen inches taller left him wide open for jeering and laughing comments from the crowd. Maravich tried to ignore the humiliation, determined to prove his skills on the court. However, his debut game did not go well. Once he passed the ball for the starting play, he rarely got to posses the ball again. It was a terribly frustrating and disappointing first game for Pete, who had never before experienced being cold shouldered by his own team.

The next game seemed to be more of the same until the final few seconds. As the clock ran out, there stood Pete, alone and unguarded. Amazingly, the ball was passed to him. As the buzzer sounded, “Pistol” Pete shot from the hip . . . the ball was up and through the hoop for the winning score!

“Pistol” Pete’s reputation quickly began to spread and he suddenly found himself under double coverage. This kind of coverage forced him to use behind the back and no look passes, which the crowd loved. Encouraged by the applause, Pete continued to play the style of basketball he had learned with his father. His characteristic showmanship style of playing soon began to draw large crowds of spectators who loved to watch his sleight of hand artistry with the ball.

When his father accepted a coaching position at North Carolina State, Pete began playing for the Needham-Broughton High School Caps. Although he had grown to be nearly six feet tall, he was still a slight 130 pounds. Opposing teams tried to capitalize on Pete’s slight stature with elbows to his ribs and he was often deliberately knocked to the floor. As a result, Pete developed a form of retaliation – he often drew the foul by stumbling backwards or falling. He had found a way to deal with the physical obstacles, but learning how to handle a loss was an even more difficult obstacle to overcome, and Pete began turning more and more to alcohol to beat back the dark memories of defeat.

Pete Maravich grew to larger-than-life status during his career at LSU. NCAA rules at the time did not allow first-year students to play at the varsity level, therefore Pete Maravich immediately became the star of the freshman team. In his very first game as a freshman at LSU, Pete racked up an astonishing 50 points, 14 rebounds, and 11 assists – marking his first of many triple-double games in his college career.

During Pete’s 3-year varsity career at LSU, he achieved NCAA records that are not likely to ever be broken. Playing only 83 games in his varsity career, Pete Maravich racked up 3,667 points, averaging 44.2 points per game. Astonishingly, Pete did all of that without a 3-point shot line! (For more see Pete Maravich Stats.)

After graduating from LSU in 1970, Pistol Pete made league history when he was drafted into the National Basketball League (NBA) by the Atlanta Hawks with a $1.9 million dollar contract. Although Pete continued to succeed at the professional level, his team performances were far from stellar and he was never quite able to reach his most coveted goal – receiving a championship ring. Pete played 6 seasons with the New Orleans/Utah Jazz, 4 seasons with the Atlanta Hawks, and one short season with the Boston Celtics.

A leg injury forced “Pistol” Pete to retire on September 20, 1980. Overweight and despondent without basketball, the next two years were the darkest period of his life. Pete said he continued to search “for life”, trying yoga and Hinduism, even something he called UF-ology. Then, in 1982, he finally found peace in Christianity.

He became a lay preacher and traveled to churches and basketball camps to relate his story to young children. His message was simple, the man he had become in his late 30s was far more important than the alcoholic basketball player he had been. As part of the speech he delivered in 1982, Pete said, “There is nothing wrong with dedication and goals, but if you focus on yourself, all the lights fade away and you become a fleeting moment in life. I lived my life one way for 35 years, for me. And then the focus came in on what I really was.”

When did Pete Maravich die?

Pete Maravich died on January 5, 1988 at the age of 40. Maravich died of heart failure due to a rare congenital heart defect. Pete had been playing in a 3-on-3 pickup game hosted by nationally syndicated Christian radio host, Dr. James Dobson.

On January 5, 1988, while playing a pickup game of basketball at the Church of the Nazarene in Pasadena, California, “Pistol” Pete Maravich collapsed and died of a heart attack at the age of 40.