Friday, March 13th, 2020 and is filed under YouTube Videos 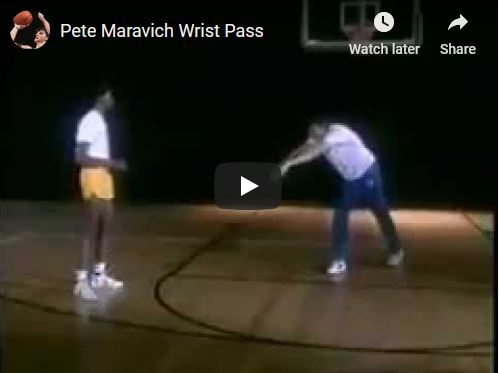 In this short video clip below from Pistol Pete’s Homework Basketball Passing video, Pete demonstrates his famous Pete Maravich Wrist Pass. Deception is the key to making this pass so effective.

The Pete Maravich Wrist Pass is designed so that the defender is deceived into thinking that the ball is going to be passed to a particular player, but with misdirection, the pass actually goes to an unexpected player. The key is lulling the defender with previous bounce passes that follow the initial steps of the pass.

Pete’s wrist pass is sort of like a head fake in football, but using the hands for the misdirection instead. Master this drill and you will have opponents “eating air” as Pete calls it.

You don’t throw it like this. It’s not deceptive that way. You can go either way with it. You could throw it that way too. Either way. Or, this way. Always in a deceptive pass. I guarantee you. Look it, he doesn’t know what I’m gonna throw it to him over there. Look at that. He’s getting ready. The wrist pass. Hey, it’ll literally make the opponent eat air.