Pistol Pete Maravich Shooting Drills Video DVD is a one-of-a-kind in-depth instructional DVD that is mastered to increase the shooting ability of any and every basketball player.

Pistol Pete Maravich Shooting Drills Video DVD from the Homework Basketball training series is a one-of-a-kind in-depth instructional DVD that is mastered to increase the shooting ability of any and every basketball player.

During the career of Pete Maravich at LSU, he racked up 3,667 points and an incredible 44.2 points per game average. Pete accomplished this despite the fact that according to NCAA rules, he could not start as a freshman. He accomplished this despite the fact that during his college years, there was no such thing as a “3 point shot”. During his 10-year career in the NBA, he amassed nearly 16,000 points and a 24.2 points per game average. Look at the record books for yourself; there are few in basketball history that come close to the achievements of Pistol Pete Maravich.

Drills Developed by Pete and his father Press Maravich

You can learn from the wondrous assortment of shots that Pete and his father, Press, took a lifetime to develop. Press Maravich had a dream of basketball and basketball players and what they could become. He taught his son Pete that he could push himself to beyond what everyone thought was capable. Because of that, Pete propelled himself to heights unthinkable. He taught him that hard work and dedication is what it would take to be the very best that he could be. These are the same drills, shots, and exercises that young Pete learned as a kid.

In 1987 Pistol Pete Maravich was inducted into the Naismith Memorial Basketball Hall of Fame in Springfield, Massachusetts. You now have the opportunity to learn from this same wealth of experience and knowledge that transformed a skinny kid into one of the greatest players in the history of basketball – don’t let this opportunity pass you by. 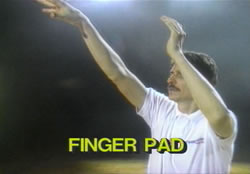 Pete Maravich Homework Basketball Shooting drills are the same drills that transformed Pete into the most prolific basketball shooter in NCAA history. Pete Maravich is the all-time NCAA career scorer, amassing 3,667 points in his three year career at LSU. Maravich averaged 44.2 points per game and most noteworthy, that was without a three-point shot line! Master your shooting skills with the master of basketball shooting – Pistol Pete Maravich.